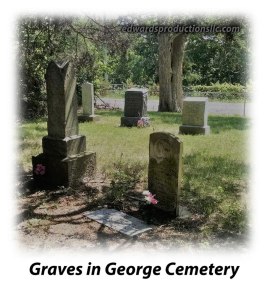 A few weeks back I visited the George cemetery south of Oak Grove, Missouri. I had never been there before but knew there were some Quantrill men buried there.

The first grave I came across was that of Gabriel William George. Gabe, as he called, fought with Pap Price at Lexington, Missouri (September 18-20) but stayed behind in Jackson County when Price took his army south to Osceola. 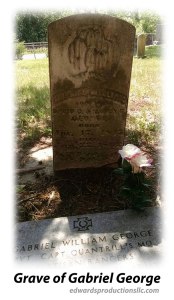 Gabe joined Quantrill in January, 1862, and fought with him at the Battle of Independence, Missouri, on February 22, 1862. On that day, William Gregg said that fifteen guerrillas entered the square at Independence and accidentally came upon a regiment of Ohio cavalry. Being terribly outnumbered, Quantrill ordered his mounted men to fire a volley into the enemy before retreating. As the guerrillas fell back, Gregg recalled, “When near the public spring Gabriel George, a splendid boy-soldier gave up his life…” Quantrill was wounded in the thigh during the battle but managed to escape. A few days later Quantrill attended Gabe’s burial at the cemetery and spoke highly of his courage and dedication to the cause. He was only nineteen years old. 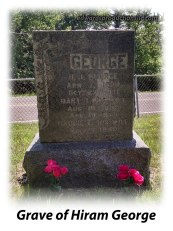 Gabe’s brother, Hiram James (Hi) George is also buried at this cemetery. He joined Quantrill in 1862. He was a member of the regular Confederate army but rode with Quantrill during their raid on Lawrence, Kansas. He was also present at the guerrillas attack at Baxter Springs, Kansas. Hi survived the war. 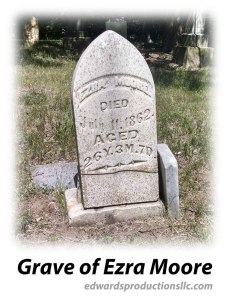 Ezra Moore’s grave is located in the George cemetery. Like many other Quantrillians’ he started the war in the regular Confederate army but joined Quantrill in June, 1862. Ezra is best known for participating with Quantrill at the Battle of the Ravines, just west of Pleasant Hill, Missouri, on July 11, 1862. During this battle, the guerrillas were completely surrounded by an overwhelming Union force but stubbornly fought against them for an hour and a half. After they had completely depleted their ammunition the guerrillas resorted to using stones and knives to fight off the Federals. During a lull, Quantrill ordered his men to disperse and as Ezra was climbing out of the ravine he was shot just below the heart and killed.

John Hicks George is buried with his brothers in the George cemetery but the picture of his grave did not turn out. Like his brothers he was a member of Quantrill’s guerrillas and participated in the Lawrence raid. Afterwards, he joined the regular Confederate army – was captured – and paroled. Hicks survived the war. 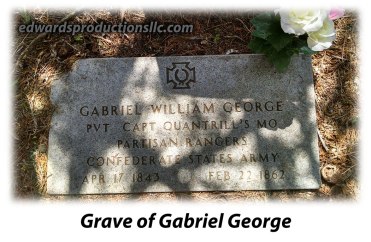 Thoughts? We enjoy hearing from you! Just leave a comment below, or join in on the conversation via social media! Simply search for Hezekiah Brown on instagram, twitter or google+ and Bloodyontheborder on facebook. In the meantime, if you’d like to learn more about Quantrill’s famous attack on Lawrence, check out Chris Edward’s and Dick Titterington’s Qauntrill’s Revenge: A Comprehensive Tour Guide available HERE! And don’t miss our great songs or photos at edwardsproductionsllc.com, where we’re helping share the true history of the Missouri Kansas Border War!

4 thoughts on “Quantrill’s Men at the George Cemetery”