On October 6, 1863, Quantrill’s guerrillas were on their way to their winter quarters in Sherman, Texas. They accidentally ran into a Federal supply train near the Missouri-Kansas border and were told that there were Union troops stationed at a fort in Baxter Springs, Kansas.

Quantrill decided to attack the fort and split his command in half. His first detachment was instructed to charge the fort from the south while he took the remainder further north. The southern command under Lieutenant William Gregg attacked and found many of the Union soldiers eating at an arbor outside the fort.

Surprised but not demoralized, the Wisconsin troops were not going to surrender without a fight and ran through the guerrillas back into the fort. Grabbing their rifles they began to fire at the attackers behind cover despite the fact that the west wall had been taken down and was wide open. The Union troops successfully fought off the guerrillas.

In the meantime, as Quantrill was in the process of flanking the fort to the north he came across a one hundred man Union cavalry company that was escorting Kansas General James Blunt to Fort Gibson, Indian Territory. The cavalrymen saw Quantrill’s men come out of the timber towards them and due to the fact that they were mostly dressed in Union uniforms, believed they were a company from Baxter Springs who had ridden out to greet them. They soon realized their mistake and Blunt ordered his men to form in a mounted skirmish line. 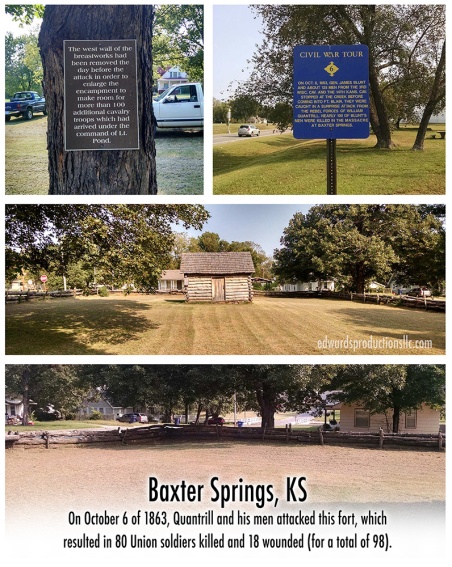 Quantrill ordered his guerrillas to charge resulting in the Union troops firing one volley after which they broke and fled. To the guerrillas the soldiers’ flight would resemble a buffalo hunt because as soon as they caught up with the troopers, they shot them off their horses.

There was also a wagon in the escort carrying fourteen members of Blunts’ personal band. Guerrilla William Bledsoe caught up with the wagon and forced it to stop. Seeing that the musicians were waving white handkerchiefs, Bledsoe approached the wagon and was shot dead by one of the musicians. Guerrillas William Gregg and George Todd saw Bledsoe being shot and rode over to their comrade. The wagon immediately took off across the prairie but the two guerrillas overtook it. Again pleading to surrender, Gregg and Todd shot them down, set the wagon on fire, and threw their bodies into the flames.

As the Union troops of Blunts’ escort scattered in a westerly direction they came upon a ravine that required their horses to jump. Those soldiers who successfully gained the far side survived, while those who didn’t fell to the ground and were shot. Major H. Z. Curtis, son of Union General Samuel Curtis, failed to make the jump and was killed by guerrillas. General Blunt made it across but nearly fell from his saddle.

Having scattered Blunts’ escort, Quantrill’s command returned to the fort to determine if they wanted to resume the attack. Lieutenants Anderson and Todd were in favor of charging the fort but Quantrill vetoed their plan saying that one of his men was worth more than 50 Union soldiers. 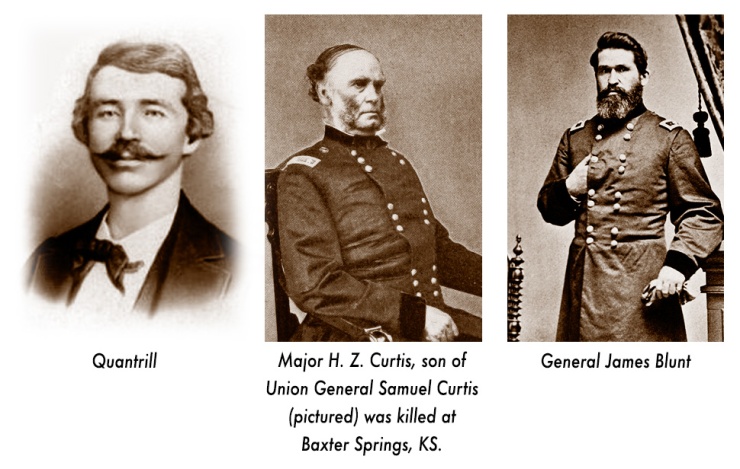